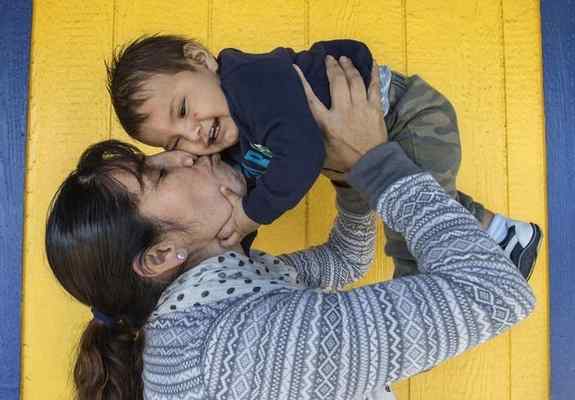 Nearly a month after Donald?Trump’s presidential victory, Sandra?Dimas is struggling with a heightened mix of anxiety and anger over how and when the president-elect will follow through on a central promise of his campaign: cracking down on illegal immigration.

“A lot of people are scared,” said the 42-year-old mother of three. Like the majority of undocumented immigrants in California, she has been in the United?States for more than a decade.

“I have kids; we live here,” she said, her voice rising. “We’re not criminals.”

Deportation hadn’t been a major concern. But now Dimas finds herself surrounded by fear. Some of her neighbors are talking about returning to Mexico, she said. Others already have left. At the Pomona Economic?Opportunity Center where she finds work, new fliers outline steps immigrants can take to avoid deportation and offer tips on how to explain the post-election era to young children.

“The fear has always been there,” said Benjamin?Wood, an organizer at the day labor center. “But now it feels more real.”

The anxiety is compounded by confusion over what policies Trump plans to pursue once he takes office. Any policy changes are likely to have an outsized impact in California, which is home to about a quarter of the nation’s estimated 11.4?million undocumented residents. About half of those immigrants live in Southern?California, including 815,000 in Los?Angeles?County, 250,000 in Orange?County, 124,000 in Riverside?County, and 118,000 in San?Bernardino?County, according to the Public?Policy Institute of California.

“We don’t know what to expect under a Trump presidency, so people are bracing for the worst,” said Shiu-Ming?Cheer, a senior staff attorney at the National?Immigration Law?Center in Los?Angeles. “Even people who haven’t been targeted for immigration in the past are worried that now there might be a knock on the door.”

Immigration experts say cultivating uncertainty among those living here illegally may be one of Trump’s goals.

“The idea is that people get scared,” said Jessica?Vaughan, policy studies director at the Washington-based Center for Immigration Studies, which supports restrictions on immigration. “Right now, people have the message that there are no consequences unless you are a serious felon.”

Increasing the fear of deportation among unauthorized immigrants is a strategy embraced by key Trump immigration advisers, including U.S. Sen. Jeff?Sessions, R-Ala., his expected nominee for attorney general. If confirmed, Sessions would oversee the federal government’s interpretation of immigration laws.

And the strategy extends to Trump’s promise to repeal President Barack?Obama’s executive orders on immigration, including the Deferred Action for Childhood Arrivals program, which has granted deportation relief to 728,000?undocumented immigrants brought to the U.S. as children, about a third of whom live in California. Trump also is expected to remove Obama’s policy of “prosecutorial discretion,” which discourages the deportation of certain groups of immigrants, particularly those who have lived in the country for several years or have children who are U.S. citizens.

“I think it’s pretty clear he’s going to repeal all of the priorities that were implemented under Obama,” said Jennie?Pasquarella, director of immigrants’ rights for the American Civil?Liberties Union of California. “That implies the Trump administration will impose a kind of dragnet policy where anyone they find, wherever they find them, is going to be put into deportation proceedings.”

Trump has sent inconsistent signals about how many immigrants his administration would actually target for deportation. During the campaign, he called for the removal of all immigrants living in the U.S. illegally. Since winning the election, though, he seems to have softened that stance, telling “60?Minutes” that he would prioritize deporting criminals.

Who would fall in that category — and make up the kind of deportation numbers cited by Trump — isn’t yet clear.

The Department of Homeland?Security has said that there are 1.9?million “removable criminal aliens” living in the U.S. That figure includes immigrants who are in the country legally. A 2015?report from the Migration?Policy Institute estimated that only about?820,000 of the criminal aliens in the DHS count are undocumented.

To get to Trump‘s 3?million estimate, immigration experts said his administration would have to widen its net to include migrants who have been charged, but not yet convicted, of crimes, as well as suspected gang members and people charged with lower-level misdemeanors. Trump also has said he will crack down on people charged with immigration violations, including illegal re-entry and overstaying visas.

“People could be deported because they are living here unlawfully, not because they are arrested,” said Stephen?Legomsky, a former chief counsel for U.S. Citizenship and Immigration?Services and professor of immigration law at Washington?University in St.?Louis. “That I think is what’s creating such fear in the community.”

Trump’s strategy bears some similarities to the current administration’s policy of prioritizing deportations of immigrants convicted of crimes. Obama set deportation records during his first term, removing roughly 400,000?people each year and 2.9?million people overall. That’s more than any other president, a distinction that has drawn the ire of immigration advocates and earned him the nickname “deporter-in-chief.”

Deportations have fallen off in Obama’s second term, thanks to DHS policies that have limited deportations to those with serious criminal records. But immigration experts say it would be relatively easy for Trump’s administration to ramp back up to 400,000?annually, and even exceed that number by reallocating federal resources toward immigration enforcement.

“He can do a lot without getting any more funding from Congress,” said Stephen?Yale-Loehr, a professor of immigration law at Cornell Law?School.

Depending on how fast and far-reaching his moves are, Trump could run into obstacles quickly, including limited detention space and a backlogged immigration court system. Nationally, the average deportation case takes nearly a year and eight months to process, according to a Syracuse?University database. In the Los Angeles immigration court, whose jurisdiction includes Orange, San?Bernardino and Riverside counties, the wait is more than two years.

“They are going to have to plan for where they are going to detain people that they take into custody, and figure out whether they have the infrastructure in place to do significantly more deportations,” said John?Torres, a former senior official at the Department of Homeland?Security who served as director of U.S. Immigrations and Customs?Enforcement in 2008 and 2009.

Torres noted that Trump could get around the backlog by using legal processes such as judicial orders and expedited removals, which allow the government to deport aliens without having them go before an immigration judge. But civil liberties groups and immigrant advocates would likely challenge those tactics as a violation of due process rights.

In the end, Torres added, Trump will likely need additional funding and manpower for any substantial increase in removals.

Without the resources to actually deport millions of immigrants, the Trump administration may rely on small policy changes that create ripples of uncertainty among immigrant communities.

“The idea is to make life as uncertain and fearful as possible that people decide to leave anyway,” said David?Bier, an immigration policy analyst at the libertarian Cato?Institute. “They’re going to be chaotic policy changes intended to cause chaos and panic among immigrants.”

But there are signs the strategy won’t work, he added. “Immigrants will figure out ways to work around it.”

There was some evidence of that last week at the Pomona day labor center.

“I don’t have papers, but I’m not scared,” Rafael?Pablo said as he waited to pick up a job. “If I get deported, I’ll leave. But I’ll come back. This is the United?States. This is the country I love.”