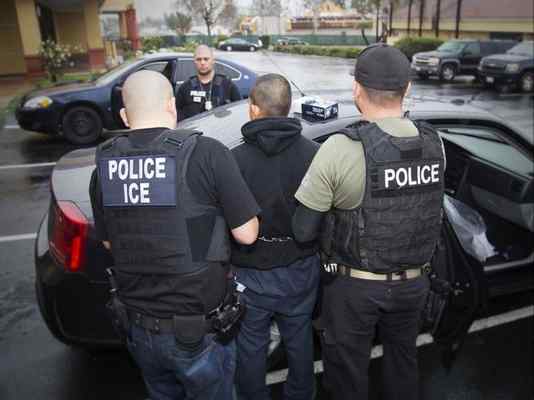 The U.S. Immigration and Customs Enforcement operation that resulted in 161 arrests in six Southern California counties last week was part of a “series of targeted enforcement operations” that netted hundreds more potentially deportable immigrants across the nation, the Homeland Security chief said Monday.

About 75 percent of those arrested in the multiday operations were “criminal aliens” who were convicted of crimes that include homicide, sexual abuse, sexual assault of a minor, drug trafficking, assault, driving under the influence and weapons charges, among others, he said.

President Donald Trump has repeatedly vowed to deport millions of undocumented immigrants. An executive order he signed days after assuming office suggests that nearly all undocumented immigrants could be prioritized for deportation. That order, along with news of last week’s ICE raids, has helped to spark fear among many Latinos and other immigrants who are concerned that they or their loved ones could be detained or deported.

Angelica Salas, the executive director of the Coalition for Humane Immigrant Rights of Los Angeles, said there are likely many people arrested in the raids who committed non-violent crimes years ago, already paid their time in jail and have reestablished their lives. Now ICE is revisiting their situation after in many cases, the agency had previously processed them and it was determined they would not be deported.

Now, “the additional cost is deportation and separation from their families,” she said. “I think it’s punishment beyond the crime that was committed.”

Of the total arrested, 94 percent (151 people) had prior criminal convictions, according to an ICE statement Monday. Of the 10 noncriminals taken into custody, half had final orders of removal or had been previously deported, ICE officials had said previously.

About half (81) had final removal orders issued by an immigration judge at the time of their arrest or had been previously deported and illegally returned to the U.S., according to ICE officials.

The vast majority of those arrested in the Southern California operation were nationals from Mexico (121) but also included those from El Salvador (16), Guatemala (11), China (two), Nicaragua (two), and Jamaica (two) as well as one each from Honduras, Belize, the Philippines, Australia, Brazil, Israel and South Korea, according to ICE.

L.A. County saw the highest number of arrests during the five-day targeted operation with 95, followed by Orange County with 35, San Bernardino County with 13, and Riverside County with seven, according to an ICE fact sheet released Monday. Ventura County saw six arrests while Santa Barbara County had five.

Virginia Kice, ICE’s Western regional spokeswoman, said those taken into custody were believed to be “potentially deportable” by the agency. They can include the undocumented, those who may have been in the country legally at one point but their status has lapsed, and green-card holders who have significant criminal convictions that would render them deportable, she said. The ultimate responsibility for removal rests with the nation’s immigration courts. However, if someone has already been deported or has a final order of removal from an immigration court, “we can remove them fairly expediently,” she said.

The city of Los Angeles, excluding San Fernando Valley communities, netted 28 arrests, while 26 arrests were made in the Valley, including nine in Van Nuys, according to the fact sheet. The city of Santa Ana saw 16 arrests during the operation.

At least 42 of the total had domestic violence convictions, 26 had drug offenses, 23 had assault convictions, 17 had sex crimes convictions and 17 had DUI convictions, though those with multiple prior convictions were categorized based on their most serious conviction. Burglary, weapons violations, vehicle theft and cruelty toward child were also among the convictions listed.

ICE officials said the raids were “conducted in accordance with routine, daily targeted operations conducted by U.S. Immigration and Customs Enforcement fugitive operations teams every day to arrest criminal aliens and other individuals who are in violation of our nation’s immigration laws.”

In addition, 37 of the 161 people (23 percent) arrested in last week’s ICE operation have already been repatriated, according to ICE officials. Those arrested who have not previously been through removal proceedings will be scheduled for a hearing before an immigration judge.

In Orange County, activists were still trying to determine Monday who had been affected by the sweeps and to quell some of the panic that ICE’s enforcement actions have created among undocumented immigrants and their families.

“We’re seeing the effect that this is having on the community,” said Hairo Cortes, program coordinator at Orange County Immigrant Youth United. “People really are frightened. They are a lot more cautious with law enforcement. There’s a heightened sense of danger.”

Cortes added that, since last week, rumors of “ICE patrols” have been circulating on social media, although in most cases the reports have turned out to be false.

Benjamin Wood, an immigrant rights organizer with the Pomona Economic Opportunity Center said that the initial panic has subsided somewhat since reports of ICE raids began circulating last week. Statements from DHS, he said, have provided some clarity about who immigration agents are targeting with enforcement operations.

“It does seem like these weren’t arbitrary stops,” Wood said. But, he added, “the less details there are, the greater potential there is for people to use their imagination to fill those gaps.”