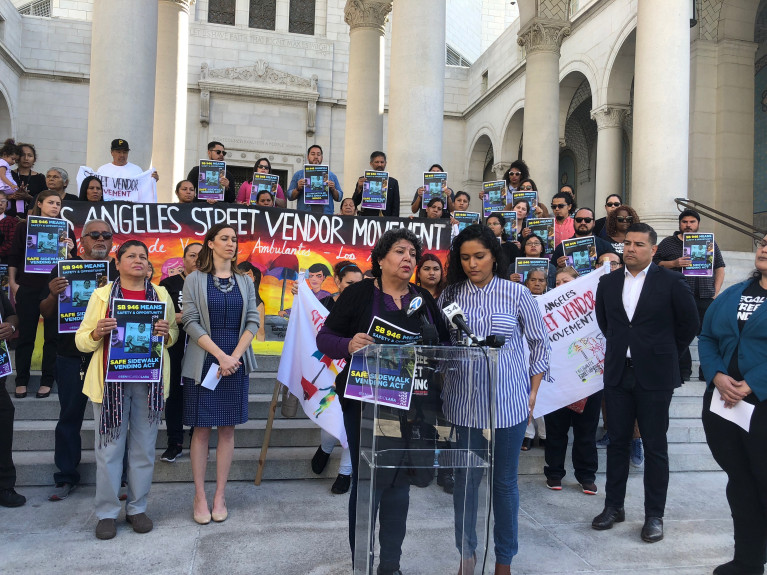 A Los Angeles-area lawmaker said Friday it is time for the state to step in, after cities have dragged their feet on efforts to legalize and regulate street-vending activity.

State Sen. Ricardo Lara, D-Bell Gardens, said his bill, SB 946, was prompted by slow action by local cities, including Los Angeles. Speaking during a news conference on the steps of Los Angeles City Hall, Lara said the city is now “moving in the right direction” toward legalizing vending.

“I want to make sure they continue to actually create a process for permitting,” he said. “We’re still waiting to see that to happen.”

Introduced on Thursday, Lara’s bill would require cities to have a licensing system in place for sidewalk vendors if they want to ban or regulate sidewalk vending in public areas.

The bill could apply to Los Angeles, which has banned the activity on public sidewalks since the 1970s. The city also has a separate ban on vending in parks.

The threat of federal immigration enforcement under the Trump administration has spurred Los Angeles leaders into removing the threat of criminal penalties from its public sidewalk ban. But the city has not taken action to legalize vending, which they had voted to do more than four years ago.

Lara and activists also say that vending in L.A.’s parks could still result in a criminal citation, because while the City Council signed off recently on decriminalizing the ban, it has not yet voted on the ordinance language.

The situation in cities like Los Angeles have left vendors in a “limbo,” according to Lara.

“We’ve given time for cities to act and to create a licensing program and permitting process, but we’re seeing that cities continue to lag,” said Lara, who was joined Friday by members of the LA Street Vendor Campaign. “And I question the will of the actual cities to actually do something about this issue.”

Lara added that “this lag has really created an unfortunate situation for our sidewalk vendors, where now they are not only being harassed, but now they’re being deported under this new Trump reality that we live in,” he said.

Now with the Trump administration and federal government threatening to more aggressively target immigrants in the country without authorization, “sidewalk vendors are more vulnerable now than ever,” Lara said.

A criminal record, even for something like a vending violation, could mean that more priority is given to deporting that immigrant, and it could hurt their ability to take advantage of immigration benefits that require showing “good moral character,” Lara said.

He added that in some cases, such as last October’s arrest of a vendor in Rancho Cucamonga, just being arrested could lead to detention by immigration official and potentially deportation.

Whether the bill actually prompts Los Angeles and other cities to act quicker remains to be seen. If Lara’s bill does pass, it may not go into effect until next year, city officials said Friday.

“The city moves extraordinarily slow and the state moves slow as well,” said Dennis Gleason, a legislative aide to Councilman Joe Buscaino, who has been pushing for a licensing system that would allow vending citywide, unless there is a legitimate reason for disallowing it, such the activity posing a public safety or health hazard.

Gleason said that while the councilman agrees with a “substantial” part of Lara’s bill, he has concerns about parts of it that might limit a city’s ability to set their own rules.

The councilman’s “concern is just that what works for Los Angeles is not a one-size-fits-all solution that will work with every single city in the state of California,” he said.

The Lara bill would also prevent the city from including a requirement that vendors gain permission to do business from the adjacent brick-and-mortar store, according to Gleason.

Councilman Mitchell Englander, who represents the northwest San Fernando Valley, was quick to come out against Lara’s bill.

“The state should focus on state issues and allow cities to develop the rules and regulations that make sense for their own communities,” he said.

Englander has said his constituents are not in favor of vending, because it does not fit the character of their area, and it should not be forced on all areas of the city.

Members of the LA Street Vendor Campaign, which is led by the East LA Community Corporation, have long pressed city leaders to act more quickly on its vending laws. They say even without the criminal penalties, the lack of a way to legally operate still means that vendors could still be harassed or have their equipment confiscated.

Isela Gracian, president of the East LA Community Corporation, said the bill would be a “tremendous step” to provide economic opportunities for vendors, and so that they do not continue to undergo harassment and business disruption.

Isabel Rodriguez, a vendor from Echo Park, said she is a “single mother” who is trying to feed her children, but is treated more like a “delinquent, a criminal” by law enforcement.

“It’s difficult to be able to provide food for our families,” she said, holding back tears. “Rents are very high … that’s why we are fighting.”

Rosalba Flores said her cousin, Marcelina Rios, is facing deportation after she was arrested her selling corn, or “elotes,” in Rancho Cucamonga.

When Rios was released by the San Bernardino County Sheriff’s Department, she was immediately greeted by immigration officials, who then detained her, Flores said.

Rios, who is now held at the Adelanto Detention Facility in San Bernardino, does not have a criminal record, Flores said.

She believes her cousin would not have been arrested if the bill proposed by Lara had been in place at the time, Flores said.

“Her only crime is having sold corn,” she said. “She’s the mother of five children. One of her daughters has special needs.”