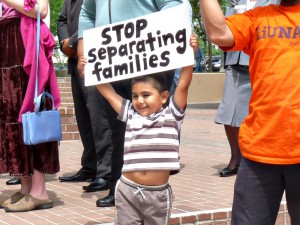 The PEOC is recognized throughout the region, and increasingly throughout the state, as a leading immigrant rights organization in eastern Los Angeles County and the Inland Empire.  In 2009, we organized a successful campaign against the Riverside Border Patrol Station, which stopped the raids on day laborers by uniting a diverse coalition of supporters, developing a media strategy to call attention to quotas and racial profiling, and using legislative advocacy at both the local and federal levels.

In 2008, we entered into a partnership with the Laborers Union, Change to Win, and the National Day Laborer Organizing Network to organize low-wage immigrant workers. We created the Day Laborer Congress of the Inland Empire made up of over 80 day laborer leaders to advocate for day laborers’ rights on a regional level.  Jointly with local community leaders, we created the Pomona Habla Coalition in 2008, which has dramatically decreased the number of discriminatory driver’s license checkpoints in the city.