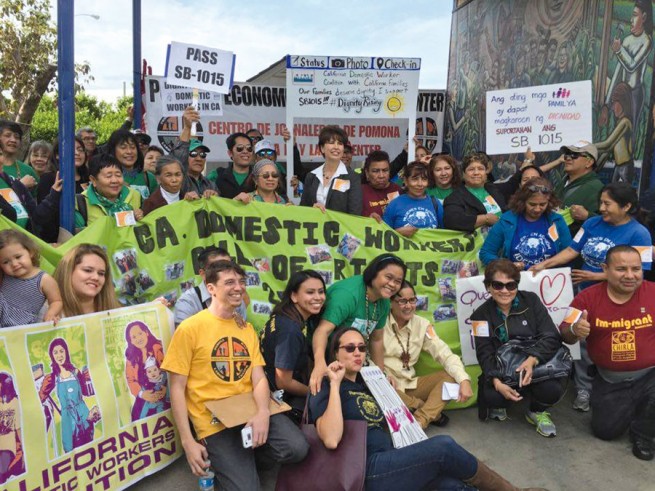 POMONA, California — Filipino and Hispanic community members rallied at the Pomona Economic Opportunity Center on Friday, March 4 to launch the campaign for Senate Bill 1015, aimed at protecting the dignity and rights of domestic workers and families.
Senator Connie M. Leyva (Dem-Chino), who championed the bill, joined with community members, activists, leaders, and civil rights organizations in support of the law.
SB 1015 builds upon Assembly Bill 241, the California Bill of Rights, which was signed into law by Governor Jerry Brown in 2013 and grants overtime protections to California’s privately hired domestic workers, improving their quality of life.

SB 1015 builds on the Assembly bill’s success by removing the “sunset provision” that designates January 1, 2017, as when the law expires and will no longer be in effect (unless reinstated or extended). Leyva’s SB 1015 will make the law permanent.
“After a long week in Sacramento, I am so happy to be here. To our domestic workers, thank you for what you do every day,” Leyva said in her remarks.
“This [bill] is about dignity, it’s about respect; it’s about the value of hard work. This is a discriminatory issue, because most of our domestic workers are women,” she continued, looking at the women in the crowd.
“When you’re not paid overtime, we’ve saying that we don’t value your work. And you take care of our most important people–our children, our disabled community, and our parents, who can’t care for themselves.”

The 1930s brought a change of labor laws to the U.S. However, domestic workers–caregivers, housekeepers, butlers, nannies, maids, assistant “hired help” employees, etc.–were excluded from the rights and protections promised to them, and their work was not valued as “real work.”
In 2005, the California Domestic Workers Coalition was formed by multiple grassroots organizations, as a “statewide network ensuring that statewide laws and agencies protect domestic workers from abuse, and uphold the dignity of domestic work.” Some of these organizations include the Pilipino Workers Center (PWC), Filipino Advocates for Justice and the Coalition for Humane Immigrant Rights of Los Angeles (CHIRLA).
According to the Coalition, many of California’s families, elderly, and people with disabilities rely on the support and care of over 300,000 domestic workers. Los Angeles County has the state’s highest concentration of domestic workers, with over 122,400 people employed in the industry.
“I am very confident with all of your help, with the California [Domestic Workers] Coalition, we are going to make this happen,” Leyva continued. “It’s going to be a permanent law, and then we’ll have even more work to do.”
Members of CHIRLA and PWC, employees and their families, were present to show their support. Domestic workers told stories about their experiences as in-home care assistants, oftentimes facing abusive and severely overworked/underpaid conditions.

“For almost two years, my employer abused me and pulled my chain,” said Teresita Villasenor, a Filipina member of PWC and caregiver for 45 years. “I worked like a horse for 84 hours in a week, without any break, and was paid about $100 a day. I did not know that domestic workers like me are excluded in labor laws, and my case was dismissed.”
“Last year, I joined [Pilipino Workers Center] and learned about AB 241, that I have rights, that there are laws to protect me and treat me fairly,” Villasenor added. “Now, I am one of the thousands of caregivers in California who are enjoying overtime benefits and allowance. I have more time for my family, for my floral design program, and I enjoy the company of my new employer. My patients and I enjoy doing creative art and activities together. I got my life back!”
Emily Uy, a member of PWC, shared that she worked as a live-in home care worker who was on call for 24 hours a day. Her salary, however, did not match the long hours she worked.
“[It] was so little I could hardly make both ends meet,” she said. “With the passing of AB 241, I had more breathing room and felt less worry and like my dignity was restored.”
Domestic work is essential to the dignity of both workers’ and employers’ families, yet their fair compensation is being challenged by the ‘sun-setting’ of current domestic workers’ rights law, said the CA Domestic Workers Coalition.

“Having labor protections feels like a win-win situation for everyone because my employer can enjoy truly loving and quality support coming from a care worker who has dignity and respect,” Uy added.
Workers at the rally called for the passage of Leyva’s SB 1015, to ensure that domestic work remains recognized, protected, and celebrated to improve the quality of life.
“This is another step forward for immigrant workers, for Filipinos, and for women workers as well, because we are taking another step towards really making our rights permanent. It starts with people, word-of-mouth awareness, education and visibility. We are at a new level now,” said Aqui Soriano Versoza, executive director of PWC.
PWC provides a multilingual hotline service, workforce and skills training, leadership development, know-your-rights and labor cases workshops for immigrant employees.
“Filipinos have been some of the most courageous coming out, speaking and reaching out to families who want to improve the rights and lives of domestic workers,” she added. “We are building momentum. Immigrant workers know that the work they are doing is important, and that they are deserving of rights. This has been a huge victory for our community.”
Read more: http://globalnation.inquirer.net/137648/california-domestic-workers-launch-drive-for-protective-law#ixzz46CfmPKiG