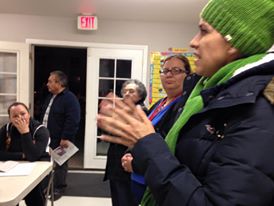 POMONA>> City leaders approved allocating $25,000 to the Pomona Economic Opportunity Center this week that will allow the center to establish to two programs, including one that will assist women secure work.

The allocation was approved on a 5-0-2 vote with Councilwoman Adriana Robledo and Ginna Escobar abstaining.

The decision was taken up during a review of the first quarter of the city’s 2014-2015 budget.

Councilman John Nolte said allocating the funding to the Pomona Economic Opportunity Center, also referred to as the Pomona Day Labor Center, would benefit residents of the city and the local economy.

“This is a really important thing we can do for a portion of our city,” he said.

“These are jobs that will be created here,” he said. “The income is very likely to stay in Pomona.”

Part of the funds will go toward the purchase of tools that workers or employers can rent to carry out home repair projects. Most of the money, combined with grants and other funding sources, will go toward establishing a women’s program through which they can secure house or office cleaning jobs.

Robledo said she is familiar with the work of the center and supports both programs but “my own hesitation is not having all the information available” on each of the programs and its implementation.

Council members approved allocating the money but now the center must submit a plan for the programs to City Manager Linda Lowry within 30 days before funding is released, said Deputy City Manager Mark Gluba.

The city’s funding will play a significant part in establishing the programs, particularly the women’s program, something that has been “a long-time dream of the center,” said Suzanne Foster, the center’s executive director, on Tuesday.

Foster said she will soon begin meeting with some of the women interested in the program in order to develop the program’s concept. In addition, Foster plans to seek assistance from a Pasadena-based day labor center that offers a program for women that can “share what they do, lessons learned and best practices,” she said.

The program can begin with house cleaning because of it is a relatively easy starting point but it can “grow and develop based on the talents and skills of the women and the women who become leaders.”

City departments’ spending is on track for the first three months of the fiscal year with none exceeding 25 percent of their funding allocation, she said.

Meanwhile, the city has been working on building its general fund reserves.

The goal is to build up those reserves so they equal at least 17 percent of the operating expenditures in the general fund by the 2019-2020 fiscal year.

The target was to have reserves at 10 percent of operating expenditures by June 30 but the city reached $12.3 million which is 15 percent of the goal, Chamberlain said.

But a city staff report pointed out that as appropriations increases during the year so do the requirements for reserves.

The city is also expected to have revenues exceed the $86.2 million expenditures by about $377,700, Chamberlain said.

More than a dozen funding proposals went before the City Council but only eight were approved eight.

In addition to approving funding for the Day Labor Center, the council approved the following allocations: $20,000 to reinstate the city’s flag program, which involves displaying flags on some of the city’s main corridors from Memorial Day through Independence Day and Veterans Day to Martin Luther King Jr. Day; $25,000 to power wash City Hall, the Pomona Public Library and the tile walkways in the Pomona Civic Center Plaza; $40,000 was allocated for park tree maintenance and $84,694 for city attorney fee increases was also approved.

A proposal to hire four civilian report takers for the Police Department will come up at a City Council goal setting study session in January and as part of the 2015-2016 budget discussions in the coming months.

The four report takers would require about $271,400 in funding.

The report takers and a second gang violence suppression unit could become among the first components needed to implements a strategy meant to reduce youth violence, the staff report said.

Requests for funding for library services, recreation services, park security along with the need for additional park and landscaping maintenance and funding increases for the city’s illegal dumping clean-up program will take place during the January goal-setting study session.