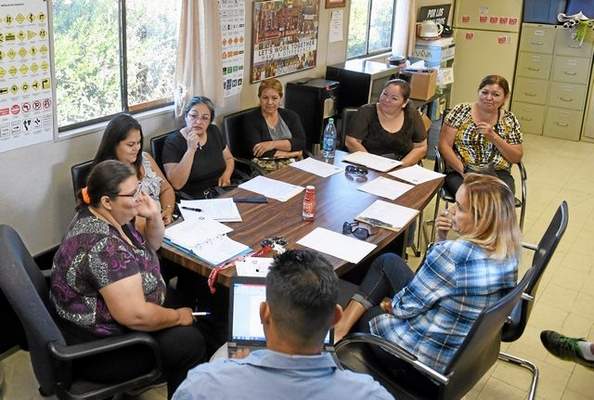 The women around a table at the Pomona Economic Opportunity Center discussed how to fine tune the recently launched Women Workers’ Program, a women day laborers’ initiative that for now offers participants a chance to earn some extra money doing domestic work.

Some found the houses they are being sent to clean require more scrubbing and washing than they expected, the women said, adding that perhaps the program needs to have someone evaluate the job before a team of domestic workers ever arrives.

“We need to have a plan,” said Cruz Martinez in Spanish, one of the 15 women who is part of the center’s Women Workers’ Program.

With the program more than a month old, the women also discussed setting aside time to walk neighborhoods in Pomona and nearby cities to distribute fliers publicizing the program that connects women prepared to handle domestic work with people who need help cleaning their homes.

The program is new to the Pomona center, also known as the Pomona Day Labor Center, but it’s a concept that has been in place for years at day laborer centers in other places, including Los Angeles, Pasadena and San Francisco.

In Pasadena, Magic Cleaners is part of the Pasadena Community Job Center. In the 1990s a group of women began exploring the possibility of creating a house-cleaning cooperative and developed the concept for it that called for using environmentally friendly cleaning products, said Angel Olvera, coordinator of the Pasadena center.

“At the time, that was very innovative,” Olvera said.

The cooperatives took off, and today between 150 and 200 women are members of the Pasadena Community Job Center, where each day 10 to 15 women are available for house cleaning, child and elderly care, and other types of work, Olvera said.

The Instituto de Educacion Popular del Sur de California, which translated is the Institute for Popular Education of Southern California, runs four day laborer centers in Los Angeles, and two of them — one in Wilmington and one in Hollywood — have attracted women, said Maegan Ortiz, executive director of the institute.

The laborers who seek work through the four centers are mainly men, but the Wilmington site attracts women who find domestic and some clerical work, Ortiz said. The Hollywood center has drawn a number of women interested in domestic work.

The interest of women working as day laborers is “a more recent phenomenon,” Ortiz said.

Some of the women have worked as street vendors or operated small home businesses that involve cooking food and selling it to neighbors and friends.

“They are young mothers to women in middle age,” Ortiz said.

Many of the women are immigrant Latinas, but during the economic downturn, women of all ethnic groups, citizens and noncitizens alike, turned to the center in search of work, she said.

Women began turning to day laborer centers in the late 2000s as greater numbers of immigrant women began coming into the country and joining their male counterparts in search of jobs at laborer centers. The men were seeking temporary construction and gardening work, and women began searching for house cleaning or caretaker work, said Veronica Federovsky, West Coast coordinator for the National Day Laborer Organizing Network.

That resulted in the establishment of programs for women, she said.

Those programs “served as models for new ones,” Federovsky said.

The women’s day labor programs are much like the men’s in that the women sign up to take on jobs for the day. The difference is that in some programs women don’t come into the centers to wait for the jobs.

Pomona’s women’s program, like the institute’s, involve women phoning into the center, letting the job coordinator know they are available to work and if jobs come in they get a call, said Fernando Romero, executive director of the Pomona Economic Opportunity Center.

For the past three or four months, the women and representatives of the center have been working to develop the program, Romero said.

Through the program, women handle jobs such as house cleaning, mopping and waxing floors, organizing closets and doing laundry.

The women will be trained to work in those and other areas they are interested in, he said.

Participants are enthusiastic about the program’s potential and that excitement is contagious.

That spirit, he said, is driven by circumstances.

These women workers “are moms, some are single moms, people that are really involved in the community,” Romero said. “We know these are women who want to get ahead.”

For some, it’s the first time they are working outside of their homes. They are immigrants and have limited education, but most of them have been active in their neighborhoods and in their children’s schools. Women in the country with proper immigration documents and without are able to participate in the program.

As for the male laborers, the programs ensure women won’t become victims of wage theft and that they’ll receive fair wages. And they do one more thing for women, Federovsky said, and that’s keep them from becoming victims of sexual harassment.

The Pomona center tells potential clients what the fee for the work is to ensure the workers receive a fair wage, Romero said.

Women are made aware of their rights as workers and should they ever be subject to any harassment they have the center to turn to for help, he said.

Just how many women across the country are working as day laborers is unknown.

The number of women laborers is increasing at the national level, but there are still no solid numbers, said Maria Figueroa, director of labor and policy research at Cornell University’s School of Industrial and Labor Relations.

A survey using figures collected between 2003 and 2004 estimated that about 2?percent of all day laborers in the country are women. The number of day laborers at the time was about 100,000 and possibly more, Figueroa said.

“They are estimates,” she said. “We cannot always be sure they are accurate.”

Figueroa and others said studies on this topic are necessary.

Women, like their male counterparts, secure short-term work through the centers, but it’s possible that those one-day jobs will lead to more permanent jobs, but those are arrangements that will have to be made between the workers and the employers, Romero said.

Martinez was trying to increase her family’s income and found a way with the help of the women’s program. Martinez isn’t expecting to make a windfall, but the money she earned on her first time cleaning helped her offset some of the cost of children’s prom expenses.

The income from her cleaning jobs “will allow me to contribute a bit to my household’s economy,” Martinez said.

“She asked me if I was interested in the program, and I said, of course, I’ll join in,” Martinez said.

Martinez and Adriana Chavira, who have the support of their husbands to take part in the program, were the first team to go on a job that involved cleaning an entire house, including the kitchen, bathrooms and sweeping and mopping floors.

Chavira, a wife and mother of four children ranging in age from 8 to 18, said working through the center gives her flexibility. She will be able to work a few days a week but still be able to make it back home before her children return from school.

The money she earns will help cover such expenses as school uniforms for her children, backpacks and school supplies. In the case of Martinez, her husband works in construction and other jobs but sometimes he goes days without work.

The money she earns will help pay rent and utility bills.

To learn more about the Women Workers Program or how to hire a domestic worker, go to pomonadaylabor.org and scroll down to Hire From Women Workers’ Program or call 909-397-4215.